Back to events
musical theatre, theatre 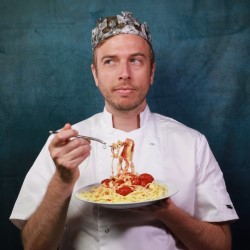 Award-winning performer Michael Kunze makes his Edinburgh solo debut as the world’s greatest rapping pasta chef: Lil Saffron, aka the King of the Kitchen. Lil Saffron is the world’s greatest pasta chef, with braggodocio to spare, but some say his ragu has lost its groove. Watch Saffron battle his own ego in his quest for culinary greatness. Expect yum-yucked yummy mummies, celebrity clown chefs, pasta grannies and the hottest pasta rap bangers ever to mash your ears. 'Michael Kunze is a comedy master' (TheReviewsHub.com). 'A riotous, enraptured crowd' (ThePhoenixRemix.com).