Christof Epaminondas and Friend(s): Too Much Encouragement 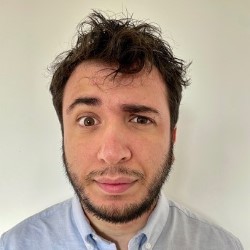 Christof's overly-supportive, Greek-Cypriot family has made him think anybody cares about his jokes and, even worse, this Edinburgh show. Through talent alone he has done very well at stand-up competitions (or the fact that 50% of the audience were blood relatives – it's unclear). 3rd-place out of 300: Get-Up Stand-Up; Finalist: Rising Star New Act Competition; Semi-finalist: Leicester Square New Comedian of the Year and Max Turner Prize. Name butchered on: BBC Radio 4. Christof plans to make a number of hilarious friend(s) who will also perform some comedy.