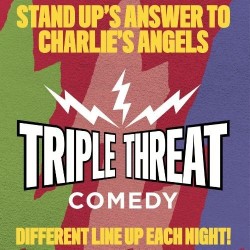 As seen at festivals across the UK. Triple Threat Comedy is a late-night showcase bringing you three of the best established and up-and-coming acts. All funny, none male; with a fresh line-up each night. Stand-up’s answer to Charlie’s Angels. This late-night show which promises to have a cracking line-up of TV names alongside breakthrough acts each time. A perfect way to end the night, or start the day! Previous acts include Helen Bauer, Ria Lina, Holly Stars, Isabelle Farah, Eryn Tett and Adele Cliff.

Just The Tonic at The Tron