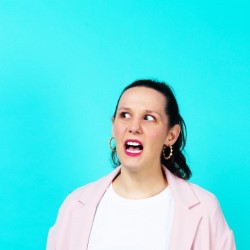 Debut stand-up hour from your favourite, local American. Understudy of her dreams and leading lady of her own life, Julie (BBC Radio 4 Extra, Elle UK) wanted to write a light-hearted show about positivity and community. Instead, her neuroses took the wheel and came up with a comically brash yet tender take on what it really means to be a live living thing living life lividly. As seen from a window in her house and occasionally on public transport, watch her dazzle in this acerbic debut hour. ‘Uniquely hilarious’ (NARC Magazine). 'Captivating' (NorthEastTheatreGuide.co.uk).