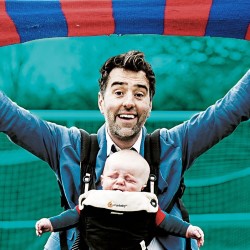 Debut show from award-winning (and he will prove it) internet comedy sensation, Jim Daly (50+ million views). Jokes, songs and stories on his two biggest two loves: his two-year-old daughter and football. He negotiates the first year of being a new dad with the help of his love of the beautiful game and one of its most noteworthy and loved players, Ireland legend Tony Cascarino. Featured on JOE.co.uk, Amazon Prime, Yahoo Sport, BT Sport, and Blank Podcast. 'Very funny' (Daily Mirror).

Just The Tonic at The Grassmarket Centre