Back to events
solo show 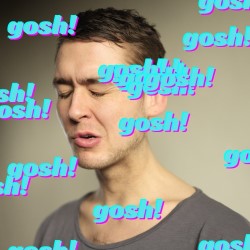 'Thanks for coming to audition. Now, I want you to pretend you're a tangerine. You're a lonely, sad tangerine – your dad's left you and your mum's a pear. Ok? Go for it.' After its sold-out London run, gosh! arrives at Edinburgh. A comedy about a comedian. Blending sketches, stand-up, theatre, clown, audio-visuals, and everything else, gosh! is a fast-paced, slick whirlwind of an hour. From the company behind the award-nominated Badgers Can't Be Friends (***** (LondonPubTheatres.com)) and from the writer/performer of award-winning comedy short film The Audition (2019). And it's in a pub. We love pubs.